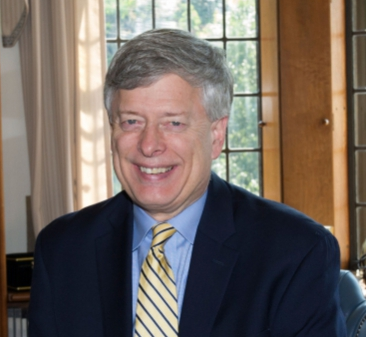 In a University of Pittsburgh career spanning more than forty years, Nordenberg has held key leadership positions, including Dean of the School of Law and Chancellor of the University. During his nearly two decades of service as Chancellor, Pitt achieved dramatically higher levels of quality and impact on virtually every front. During that same period, the higher education and healthcare sector played a critical role in the rebirth of the regional economy.

Nordenberg currently serves as Chair of Pitt’s Institute of Politics and Director of its Dick Thornburgh Forum for Law & Public Policy and holds the special faculty rank of Distinguished Service Professor of Law. For more than thirty years, Pitt’s Institute of Politics has led a search for common ground by providing a non-partisan forum for elected officials and other civic leaders to consider policy issues of importance to Western Pennsylvania. The Dick Thornburgh Forum for Law & Public Policy – named in honor of the former two-term Pennsylvania Governor, U.S. Attorney General and United Nations Undersecretary General -- offers public education on important global, national and regional policy issues.

Public service – at the local, state and national levels and at the request of leaders from both political parties – has been a hallmark of Nordenberg’s career. His academic specialty is legal process and civil procedure. As Dean of Pitt’s School of Law, he was appointed by Chief Justice William Rehnquist to the U.S. Advisory Committee on Civil Rules and by Chief Justice Robert Nix to the Pennsylvania Civil Procedural Rules Committee. He also was appointed and reappointed Reporter for the Civil Justice Advisory Group of the U.S. District Court for the Western District of Pennsylvania by Chief Judges Maurice Cohill, Gustave Diamond and Donald Ziegler.

Early in his tenure as Chancellor, Nordenberg was appointed by Speaker Matthew Ryan to co-chair the bipartisan Legislative Commission on Restructuring Pennsylvania’s Urban Schools. At the same time, he was asked by local business leaders to chair an Oversight Committee on Regional Workforce Development. Subsequently, he was appointed by Pittsburgh Mayor Tom Murphy to chair the Leadership and Governance Committee of the Mayor’s Commission on Public Education and by Allegheny County Executive Dan Onorato and Pittsburgh Mayor Luke Ravenstahl to chair the Citizens’ Advisory Group on the Efficiency and Effectiveness of City-County Government. He currently chairs a new, independent nominating committee created by Pittsburgh Mayor Bill Peduto to ensure that appointments to the Pittsburgh Water & Sewer Authority board are merit-based. He also served as co-chair of the Education subcommittee of Governor Tom Corbett’s transition committee, as a member of Governor Corbett’s Advisory Commission on Post-Secondary Education, as a member of the steering committee for Governor Tom Wolf’s transition committee and as honorary co-chair of Auditor General Timothy DeFoor’s transition committee.

Nordenberg has received many important forms of recognition, including being honored, with CMU President Jared Cohon, as Pittsburgh’s Persons of the Year by Pittsburgh magazine and being named a History-Maker in Education by the Senator John Heinz History Center. To honor his many accomplishments and contributions, Pitt trustees and other donors personally endowed both a professorship and a scholarship program in his name. Pitt’s newest residence hall also is named for him. Pitt’s University Senate and Staff Association Council dedicated two marble benches, which sit outside the Chancellor’s Office windows, to honor Nordenberg and his wife, Dr. Nikki Nordenberg, for their contributions to the University. The faculty Senate honored him as the only Chancellor to receive its annual award for service to the Senate, the Pitt Alumni Association named him a Distinguished Alumni Fellow, and Pitt students named a social space in the William Pitt Student Union “Nordy’s Place” in his honor.

Earlier this month, Nordenberg received the Lifetime Achievement in Governance Award from the National Association of Corporate Directors, Three Rivers Chapter, reflecting his significant governance contributions to many of Southwestern Pennsylvania’s most important organizations. He served for more than sixty combined years on the boards of three of Pittsburgh’s largest employers – UPMC, Pitt and BNY Mellon. As technology-based economic development became more important, he was the founding Chair or Co-Chair of the boards of the Pittsburgh Digital Greenhouse, Life Sciences Greenhouse and Robotics Foundry. He has served on the boards of such other organizations as the BNY Mellon Foundation for Southwestern Pennsylvania, Manchester Bidwell, the Pittsburgh Technology Council, Thiel College, the United Way of Allegheny County, and the Urban League of Pittsburgh. Nordenberg also chaired the boards of the Pittsburgh Council on Higher Education and the Pennsylvania Association of Colleges and Universities and served on the Executive Committee of the Association of American Universities.

Nordenberg recently served on the small independent committee created by the Jewish Federation of Greater Pittsburgh to fairly disburse millions of dollars of undesignated donations made after the attack on worshippers at the Tree of Life Synagogue. Since then, he has successfully co-chaired two major anti-hate initiatives, leading to the creation of both a joint Pitt/CMU anti-hate center, focused on the spread of hate online, and a major global anti-hate conference.